MIDI environment from the 1990’s

These two pieces use software-generated piano.  Although, in search of a decent sound the only real solution was, and is, a real piano – the sound, the attack, the touch, the feeling (our choice Yamaha – no recordings).

However putting several instruments together without creating a band or disturbing the neighbors, then a keyboard controlling snyths and VST* instruments can serve well.  *VST = ‘Virtual Studio Technology’

Our keyboard is a Roland RD600 with an Alesis QSR synthesizer – both dating from the late 1990’s. Piano is from Steinberg while Native Instruments provide the B-3 emulator, named “B-4”!  CuBase holds everything together via MOTU’s MIDI controller and audio mixing unit.

In the photos you can see how this is all handled physically within a custom-built housing incorporating twin screens, computer keyboard, and a Dell tower computer. 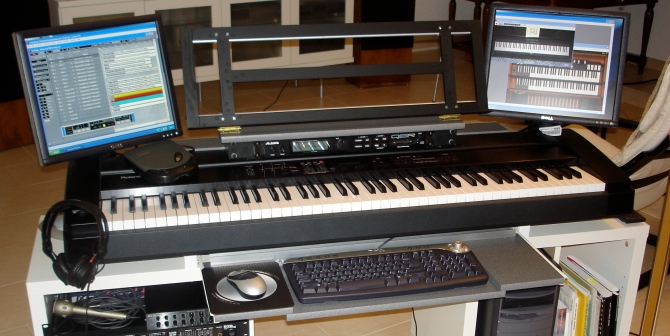 Technique behind the above 3 sets of audio tracks:

2018 update:
With the risk of changing keyboard and VSTs in 2019, it is useful to recall the original RD-600 on-board sounds – through the 3 demo pieces programmed into it:
1. Piano Prologue: 2. Take Me There: 3. Moving Waves:

The Alesis QSR synthesizer has five demo songs (haven’t said much about that device, it is a rack version built in just above the keyboard).