The one year “arena rise and fall” cycle began with piles placed in the lake to support a massive terraced wooden construction (‘Terrasses de la Confrérie) and an elevated public walkway. This was followed by earth works for the arena “basement” a below-ground pit for housing the 20m long central ramp which allowed scenes such as 200 soldiers marching up from out of the ground. ⬇

The construction is as impressive as the daring investment decision to make this and other equally bold features of the arena.

In addition to the extra height clearance provided by the ramp pit, there is also a 2% slope down towards the lake, providing an extra meter of available headroom at the south end compared to the north end of the 50m long stage area.
⬅  Photo during construction shows shallow north end stage floor clearance; in the distance is the south end, showing position of the ramp. Photo: alexandre_buttler_epfl

⬆  Our photo above, taken during deconstruction, shows part of the the concrete pit and the “hinge” end of the 20m long and 4 meter-wide ramp. The ramp in its raised position must hold the weight of many performers as well as vehicles – it also carries part of the LED floor, continuing to display as it descends and rises. In the raised position it is difficult to see any tell-tale gap; precision of positioning of the ramp is to the millimeter – amazing for such a large and heavy structure.
⬇  View below shows the ramp girder also from the “hinge” end, looking into the south (lake) end of the arena. The ramp here looks short and stubby because of the telephoto effect, photo being taken from the north end of the site. 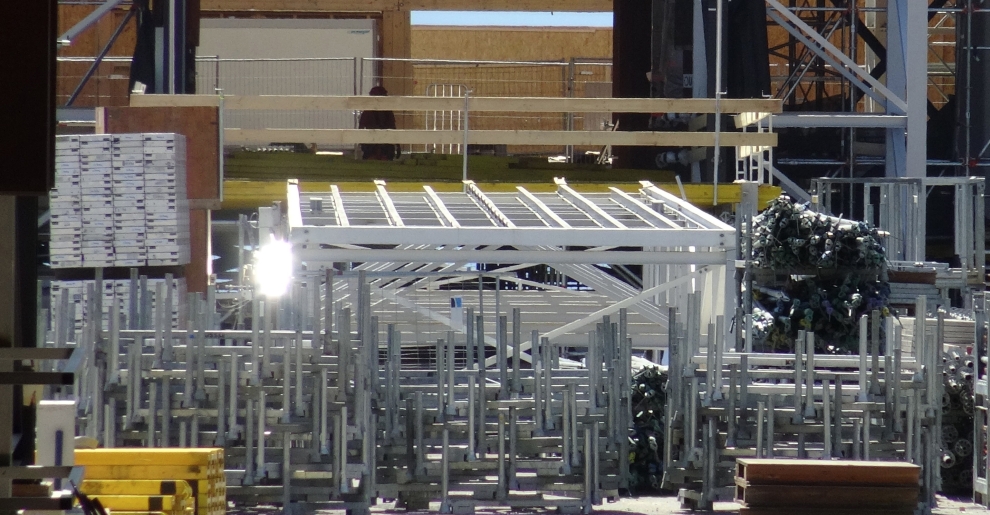 ⬇  Photo below shows part of the center section.

⬇  Image after the girder had been removed – just the “pit”remaining visible:

⬇  Next is a look beneath the stage, and also out beyond the end of the ramp.

Once our working scale model of the arena ramp was completed, we began the long-awaited opportunity of integrating it into our documentary.
View from the north end of the LED floor, towards the south.  ⬇

Top view of the LED floor model. The scale is 1:30, so the 45 meter LED floor is 150 cm – a part of the stage surrounding the LED floor, in white, is in addition – a small section of the stage descends with the ramp – as in the prototype.  ⬇ 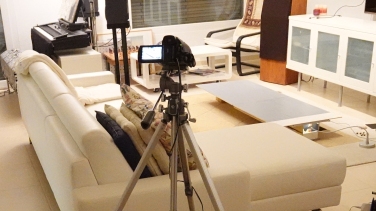 Our model fits perfectly into this magnificent view of the entire arena – these two just-for-fun videos required shooting the model from quite a distance to get the correct angle.

⬇ One more cool clip to develop a few more seconds of our documentary – we begin with a high angle shot and switch to an almost flat stage level shot, and angles in between. Jazz group is from our live recording of ‘Quantact‘.