Traditional camcorders are confronted with superior performance from mirror-less camera bodies with interchangeable lenses and the possibility to choose freely the size of sensor. A major downside is that the resulting configuration is not going to be as compact (let’s say ‘as neat and friendly’) as camcorders have been. Also the vast choice of kit makes the selection process and construction of a reasonable working “rig” quite complicated.

On a parallel track is the incredible photo and video performance of the smart phone, which for many applications has already replaced traditional cameras and video capture. And predictions are that smartphones in just a few years from now will surprise us more than they have done so far.

Already, the processing power and the use of artificial intelligence (AI) to which that power is applied within the phone camera is making its way into the “real” cameras as well. We find it in the ability to focus and to track focus by recognising objects including faces and even eyes of people. In 2021 auto-focus technology of high end (and some not-so-high-end) mirror-less cameras is becoming so good, even compared with a year ago, making the most ardent supporters of manual focus-pulling look twice.

We find this AI in the ability to not only define exposure but to apply exposure selectively to brighter and darker areas of the scene. We find it in real-time colour grading. We find it in electronic image stabilisation within a camera body, as well as within the interchangeable lenses themselves.

With our live-streaming application we are using 2-3 camcorders via a video switcher and 6 microphones through a mixing desk into the same switcher which sends everything to a MacBookPro and OBS (studio/streaming software). We added extra lights in the church sanctuary to get decent images from consumer cameras, which send out 1080p and record separately at 50 fps. We record also the raw audio tracks so we have everything to re-mix whatever parts we choose later on.  Our goal, for the interim period while Covid restrictions remain, and for the post-Covid  times when streaming is likely to remain as a secondary offering, is to re-vamp the entire system with more discreet equipment and a much simpler work-flow than we have right now. It should require one operator (or none) and not demand extensive technical knowledge.

And here is where our first serious re-think comes in – do we follow the traditional route or are we at the point of a major deviation from it? The pandemic has changed the minds of many, and has accelerated the technology for any kind of devices used for capture and processing that enables remote working or gatherings. Major wars of the past have always accelerated technology and the “Covid war” is no exception. So are we fully aware of new advances, availability of components, and thus more opportunity better implementation of solutions?

In place of the traditional approaches to streaming we can imagine a distributed network of smart phones in place of tripod mounted cameras, or wall-mounted gimbals programed to track movement of the presenters and performers. But that might be a complex and expensive set-up, so instead we can imagine a single but excellent camera which takes in the necessary audio streams all directly to the wireless network. Which way to go?

Today we can download a 15 dollar app which provides full control of the smartphone camera (or cameras) and full control of then HDMI video and audio which the phone sends out. There are several of such apps, the recent advances are products of the pandemic.  The image above shows the app screen within OBS, but perhaps this one below is more useful: The circle defines the area for exposure adjustment, the square for focus (illustrating a function of the smartphone not normally evident), the vertical slider is for zoom. For us over the age of 25 (!) it requires some humility to recognise the qualities of smartphone capture surpassing those of many traditional cameras (example below). 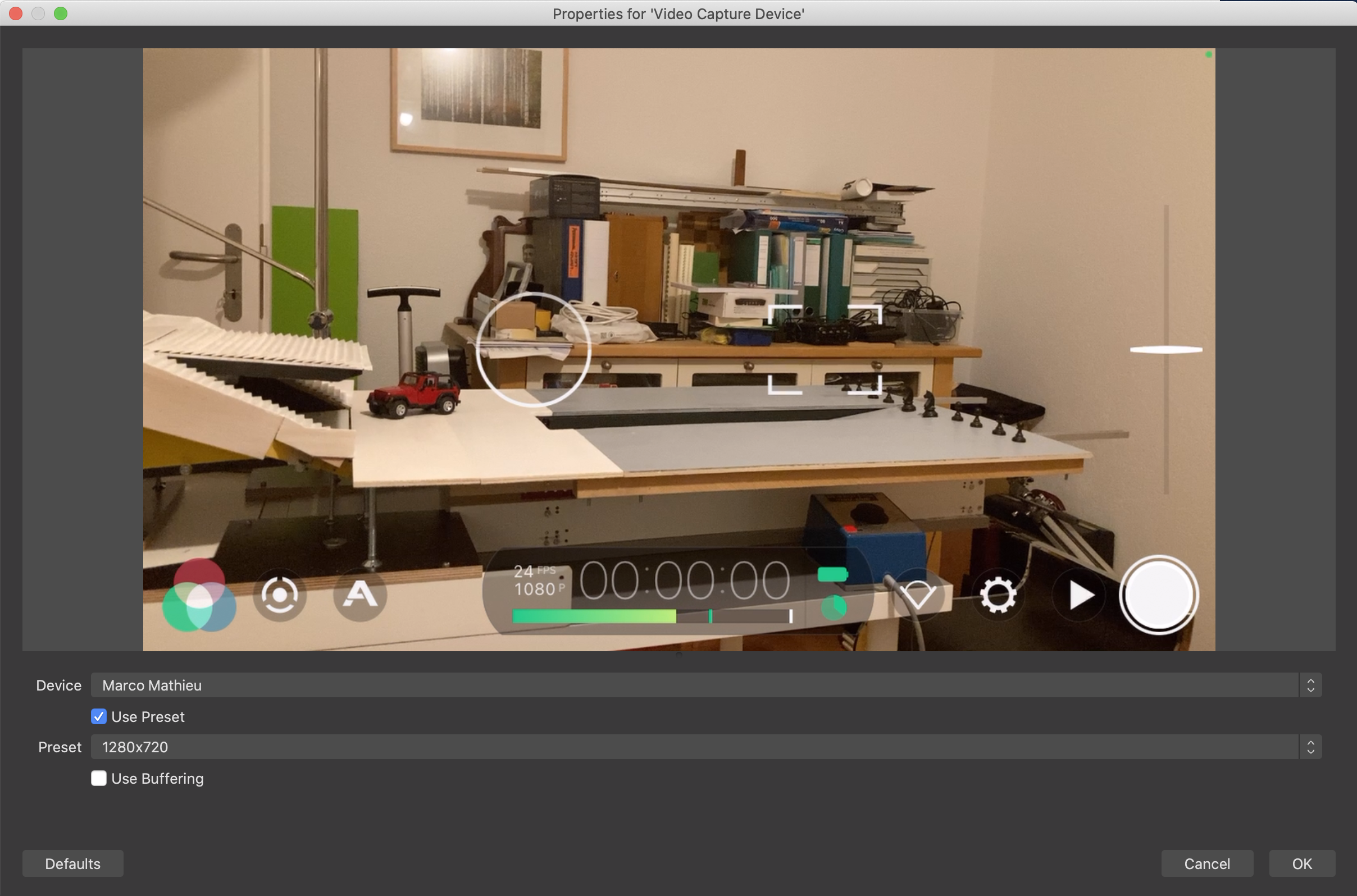 The live-stream project is just one example, most video capture methods will require a similar reflection and a willingness to question our often die-hard practices.

The two images below were captured side-by-side, by a Sony RXOII (left) and by an i-phone SE, both on full auto — note the exposure detail below the surface of the model out of the phone. In anything other than ideal light conditions the phone consistently gives better results. We took four cameras into the Gotthard tunnel visit and although on some shots a conventional camera did better, the most reliable results came from the phone.

We will be doing more experimenting with the i-phone to see how well it can be incorporated into our video work. Such a shift is all quite embarrassing actually !