As the renovation covers are removed
from the Grand Théâtre we follow their progress.
It won’t be long before the Opéra des Nations returns home!

The Grand Théâtre de Genève (a copy of the Opera Garnier of Paris) has been closed for two years for renovations that rediscovered the original decorations of the building inaugurated in 1879 — and also revealed some of the original features hidden in 1951 – after the fire that ravaged the building.

In the lobby, the false ceiling was removed to discover the original moldings. The stairs have found their green hues, burgundy and gold. Upstairs, the work in the foyer and the large foyer also allowed the walls and ceilings to return to their original appearance, especially the Golden Square. Released from their carpet coverings, the floors have been fully restored.

The main theater area was not affected by the work. But the 1,500 spectators will benefit from a greater comfort thanks to the new ventilation.

The reopening after renovations was in February 2019 with the “Ring” by Richard Wagner. This was followed by an open day and a MAPPING light show – here below: 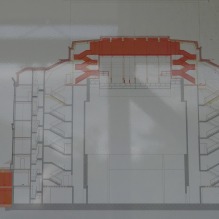