It might look a mess, but efficiency won out over aesthetics in this case.
A bit of background might help explain why.
When volume was low and when archiving had not yet reached any critical mass, life was relatively easy!

However, marcomathieumedia‘s annual capture of raw material and completed video archiving has reached a level requiring two to three terabytes of storage. It was soon realized that a few 1or2 TB hard discs permanently connected to one of the i-Macs provided neither enough space, nor flexibility in usage between editing stations, nor any reasonable back-up solution.
The method chosen requires a USB3.0 port expander – the one in the photo is a 7-port unit which is good for today – it is made by TP-Link – it provides power and safe hot-swapping, which has been a problem in the past.

After experimenting with a battery of permanently-installed discs, and also considering redundant disc arrays, the current arrangement grew out of practical usage and of course also cost and security. There was no data storage and cataloging plan, but rather a natural evolution of trial and improvement. 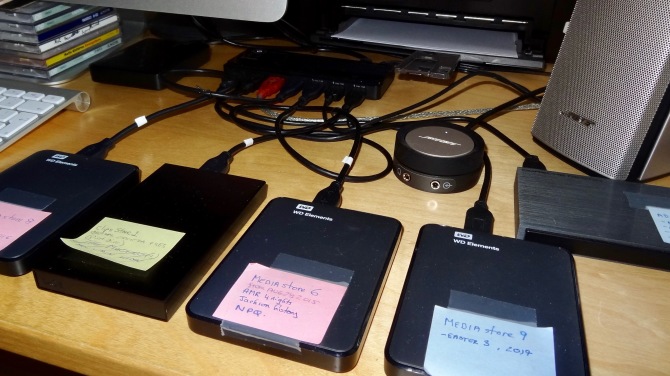 Here is how it works:
1. All captured video, audio, and images are stored – by event – on a 1TB hard disc.
2. Camera and audio cards are not erased until the files are stored and also that a back-up copy of that hard disc event has been made.
3. As events are worked on, and exported media files created, the event files are copied to an identical structure on a second hard disc.
4. When the process was started, 500GB discs were used, now 1TB is the standard – the risk of failure with simple hard discs is always a concern, so better to use smaller discs rather than go for high density ones.
5. The primary drive is permanently connected to the primary workstation, the back-up is regularly updated and placed elsewhere in the studio. Once the primary event drive and the back-up copy discs are full, then the back-up is taken to a bank safe which we rent for that purpose.

A bit more explanation:
If we were to need only the current disc (and let’s say, maybe the previous one for a few weeks after the change-over to a new disc) then two USB ports would be sufficient. However, frequently there is a need to access clips and images from previous years – and our cataloging system allows locating them quite easily: but then comes the need to have several archive files available simultaneously so that the editing software can operate without any re-copying of those files to a work disc.
Thus, this seemingly messy use of multiple discs provides efficiency, security, and flexibility at a quite reasonable annual cost of around 200.- (Swiss-francs/dollars).