The featured image of this post is a model of the cutting head of the machine which bored its way through 57 km of rock to cut the Gotthard base tunnel Actually there were 4 machines for 75% of the 57 kms, two one way, two the other. Strictly speaking each machine bored through about 10.7kms of mountain – still impressive.  So here, with post number 2 of the “4k or not to 4k” experience, it’s very much like a rock boring machine; and we have hardly scratched the surface ! 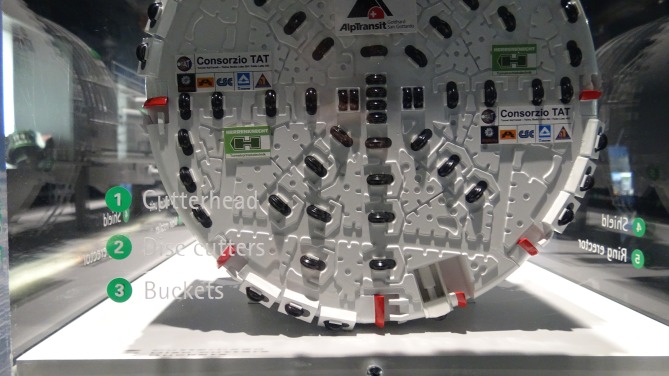 First experiences with the new AX33 camera have been with FHD as we needed to work and produce FHD videos. Then came the moment to try 4k – an error message indicating that 4k cannot operate with the type of memory card installed (the one which came with the camera). So to the shop to buy one which would work – no luck, the installed card is indeed the fastest and correct type – so we plugged in a new one – same message. Then the shop became really helpful and we tried those same cards in another camera – yes, they both worked fine on 4k.  As yet, we have not had a moment to return the camera (we need it for everyday work) so the 4k functionality is as yet not operational.

In the meantime, we realize that FHD remains the standard, we rented two 1″ sensor Sony cameras (PX70’s) recently – no mention of 4k – good quality with 1080p from which most people can benefit.  We have excellent quality aerial video from the Phantom 3 quad-copter and we have a 55″ 4k Panasonic screen on which to show it, but let’s be honest, for the moment we can well do without a 4k work stream that puts pressure on all our equipment throughout the production chain.

More to come, I am sure, but no longer a priority.