The Lutheran Church of Geneva doesn’t look like a church, it is simply a beautiful 250 year-old building at the lake end of the Place du Bourg de Four in Geneva’s old town.   When the windows are open during summer worship services on Sunday morning, passers-by can hear the organ and singing – but at other times the building is rarely identified as the home of a vibrant international church community. 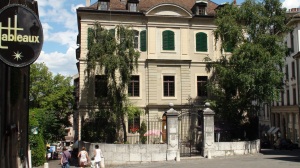 To attract attention of the uninformed, it was decided to develop a poster and video campaign along the ‘rue de la fontaine’ at one side of the building. 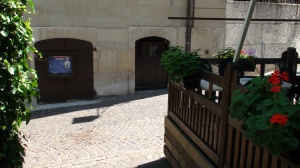 The posters + video, are in a sequence from ‘downhill to uphill’, so that a story unfolds, with the video screen as the concluding imagery. 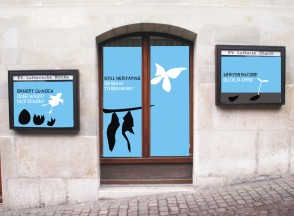 The graphic design began with ideas of a small group of members from both German and English-speaking congregations, the actual design would be made by Claudia Becker.

Transferring the graphic concept to video would be the role of ‘marcomathieumedia’.

Claudia’s graphic work resulted in 5 campaigns; the one shown in these pictures concluded with the following repeating video:   (later examples in a 2013 blog).  In those early days, we chose animated graphics – only later were captured video images introduced.