“Probably the best guitar player out of Namibia” 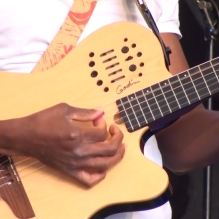 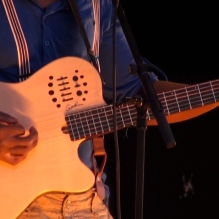 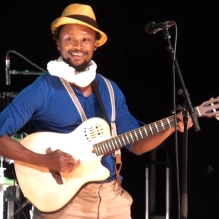 First encounter with Jackson Wahengo at the Parc des Cropettes in Geneva at the AMR summer festival weekend in June 2010. We are so grateful to have met him – attracted to his friendly personality, guitar virtuosity, and rhythm of  ‘Afro-Jazz’.

Our story continues as we followed Jackson around the canton from 2010 to 2015 – here, some of our favorite memories. (Plus of course his visit “chez-nous”!)

In August of the same year, the confluence of the Arvre and the Rhone – aptly named “Jonction” – was where Jackson performed a true virtuoso accomplishment (almost in the dark). As night fell we switched our camera to infrared (see second video with the full trio in the side-bar).

In October, Jackson’s quartet animated the “Maison Verte”- maison de quartier sur la place des Grottes (popular area behind the main Geneva railway station):  this chosen song is placed in the “intimate Jackson” category along with one recorded in 2012 in the Geneva’s old town – see them both in the side bar: ‘Intimate Maison Verte’ and ‘Intimate Bourg de Four’.

We also discovered a 2011 photo of Jackson taken with Quincy Jones at Montreux Jazz Festival.

In that same Montreux year, we ‘studio’-recorded acoustic guitar solo “mpa-nda-popi”,  approaching 20k hits — see “Jackson@home” in the side bar.

Finally we share recordings from two “Fetes de la musique”; 2013 and 2015.
The first (2013) we call “Sunset Concert” for obvious visual reasons and the chosen piece here was played as the sound check.
See two more songs from this concert in our 2013 blog.

At the 2015 ‘Fête de la musique, Jackson played in Carouge with his latest band formation.
One piece is presented here out of five we recorded – there just might be a dedicated page to this concert, particularly as it is the last one we visited prior to Jackson leaving Geneva to settle in Copenhagen. Watch our blogs! And watch also Jackson’s official video clips – links in the side-bar.

Jackson has returned to do more work in Namibia — here a January 2018 interview with the Namibian Broadcasting Company where he shares his journey from childhood. (TMAG = NBC’s Thursday Magazine program) – and a February posting from a second interview from ‘studio 6’.