Albeit in a much modified format, the good news is that the show has begun, and will go on for the two weeks 2-17th July.

We were there prior to the opening on Thursday and again Friday to catch what we can on camera – no views inside the venues, neither concert nor workshop — Covid precautions, quite rightly, taking priority.

From the layout we can see that the congress center with the Stravinsky hall and Jazz Lab is not part of the offering with its traditional 4000+2000 places, mostly standing – close proximity.  Neither is the ‘House of Jazz’ (la Croupole) with its 600 seats. Free-circulating outside concerts such as ‘Music in the Park’ and other smaller stages are not present either. However, there are plenty of free concerts, most requiring reservations and careful Covid rules. In fact, as can be seen in yellow on the festival map, the two paying areas are the “Scène du Lac” (500 seats) and the “Petit Théâtre” (300 seats). 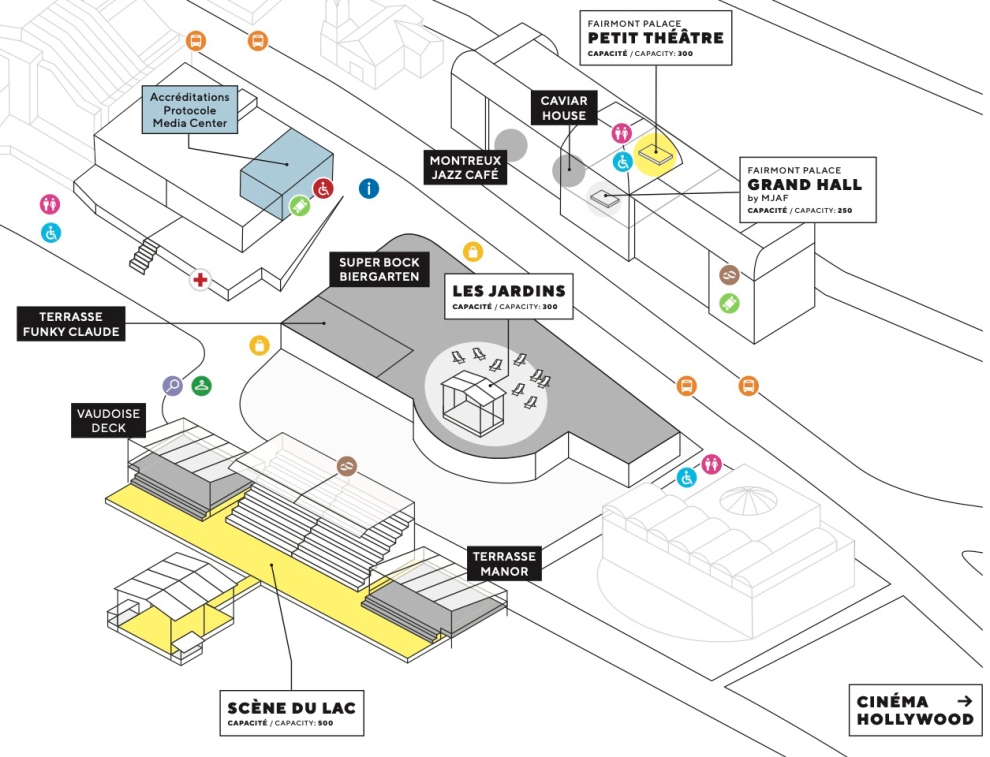 Already before the first day there have been several program changes, mainly due to quarantine requirements of artists coming in from the UK in particular.  Changes involve some replacement at short notice, and also artists doubling their appearance.

The weather will now play an important role as the 300 place “Les Jardins” has outside seating, and the “Super Bock Biergarten” connected with it has limited covered space. Another weather issue, and probably the most important, is high wind and storms coming up the lake causing damage to the stage and tent-roofs. Fingers crossed on this one.  “Fairmont”, the Montreux Palace Grand Hall is for free workshops, talent awards, and sunset jam sessions. 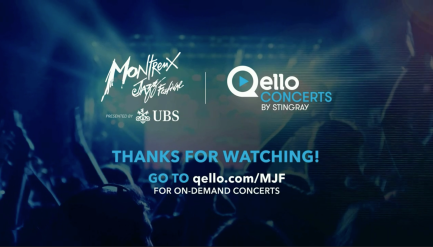 Some concerts are being streamed, sponsored by UBS – sign up here.

We watched the full Lake Stage concert of Delgrès, quality is excellent. Of course you have to deal with the intense commercial nature of the site, but is worthwhile. Each of the streams is broadcast three times to cover different time zones We attended the concert of Altin Gün and was able to re-watch it the following day at the stream time for Australia!

Here are our photos of the lake stage, from the shore. We have closer images from our 14th July Yet No Yokai and Altin Gün experience – do look.  As usual on this site, click on any photo to view full size version. 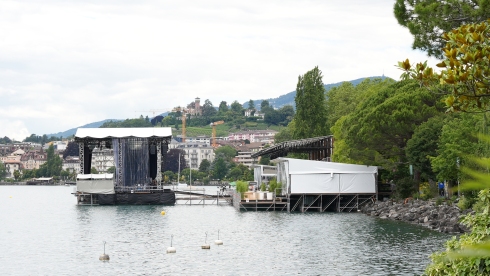 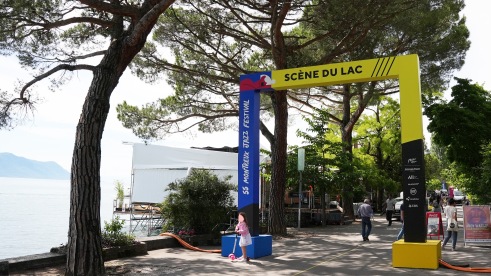 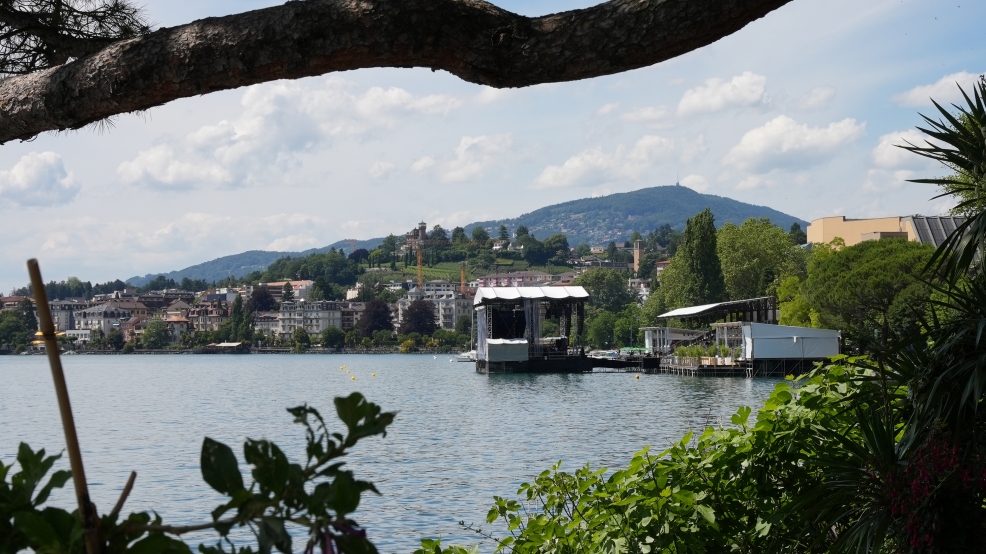 And images of “Les Jardins” along with the  “Super Bock Biergarten”.  Look at the weather-dependency here, wow. 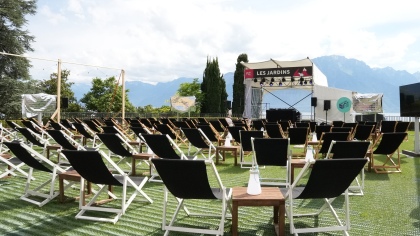 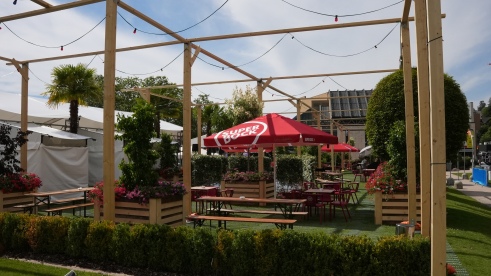 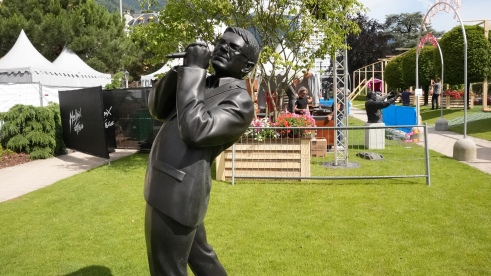 Last photo is of the statue of Claude Nobs, creator of the Montreux Jazz Festival in 1967. 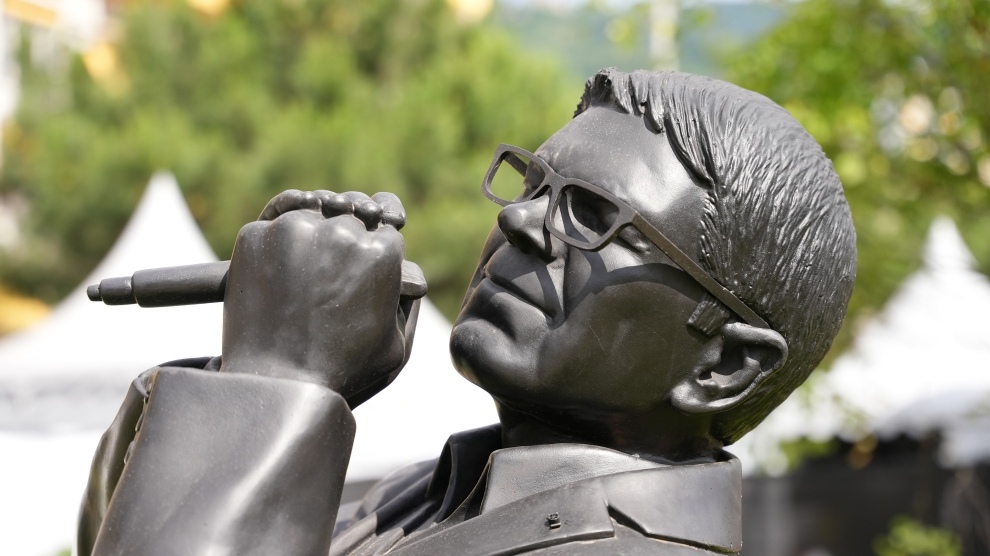 In case you are wondering about the grills behind Quincy Jones, they are OFYR home grills using wood as fuel. This was a last minute discovery by speaking to the guys cooking there!   More information on the OFYR videos.