Second in our four-part series of the Geneva Auto Salon 2017.

Video two is “green movement” – we were expecting more hybrids, plug-in hybrids and electric cars in general, but what has been an eye-opener is the use of electric motors in the power chain of high end and high performance cars.  Good news if the technology will trickle down, or even waterfall down, to mainstream use.
As history suggests, the racing industry with the e-formula will be no doubt be a good contributor here. 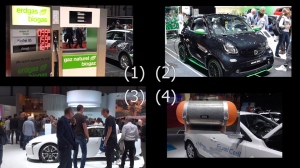 Our film looks at four main categories of green evolution:
1. biogas-fuelled internal combustion,
2. battery-powered electric,
3. hybrids using internal combustion and electric (plug-in or not) in some configuration of power train where both units are involved in driving the wheels.
4. Fuel cell vehicles where hydrogen is converted to electricity to drive electric motors.

We found also one car (there might be others we didn’t find) which doesn’t fit any of these categories. It consists of a turbine – a jet engine basically – which is used uniquely to charge batteries in an otherwise electric-only vehicle. Thus, it does not fit into the hybrid category (hybrids use more than one power source to drive the wheels). This is a close-to-production concept car, and it is an expensive experiment in a car estimated to cost one million (francs, dollars, euros, whatever).  However we found the idea fascinating and believe it can be a major future solution to both range limitation and costs/weight/space of using a conventional hybrid chain.
(TechRules, China)

Other encouraging technology we found is the use of the more conventional hybrid chain configured to eliminate the gear box entirely by using electric motors (which have high initial torque) on low speeds. There seems to be a transfer of railway locomotive hybrid configurations to the restricted space of the automobile.
(Regera made by Koenigsegg of Sweden: see video 4)

On the electric-only list (in video 2) we discovered the Rimac supercar – a Croatian company making their own batteries and already supplying them to other high-end car producers.

There was much less evidence of bio-fuel cars this year (Audi g-tron prominent) – and the two manufacturers of fuel cell vehicles noticed were Hyundai and Honda – maybe biogas as well as hydrogen distribution networks will be the barrier, rather than the technology.

1. ‘In and around the cars’(everything except the cars themselves)
2. ‘green movement’ a now fast-moving evolution of global car technologies, consumer acceptance, and political enablers.
Develop your own predictions for green mobility of the future.
Note: Tesla was absent from the show this year.
3. ‘auto salon visitor, 2017 – ‘seriously looking’.
4. Luxury – ‘over the top’